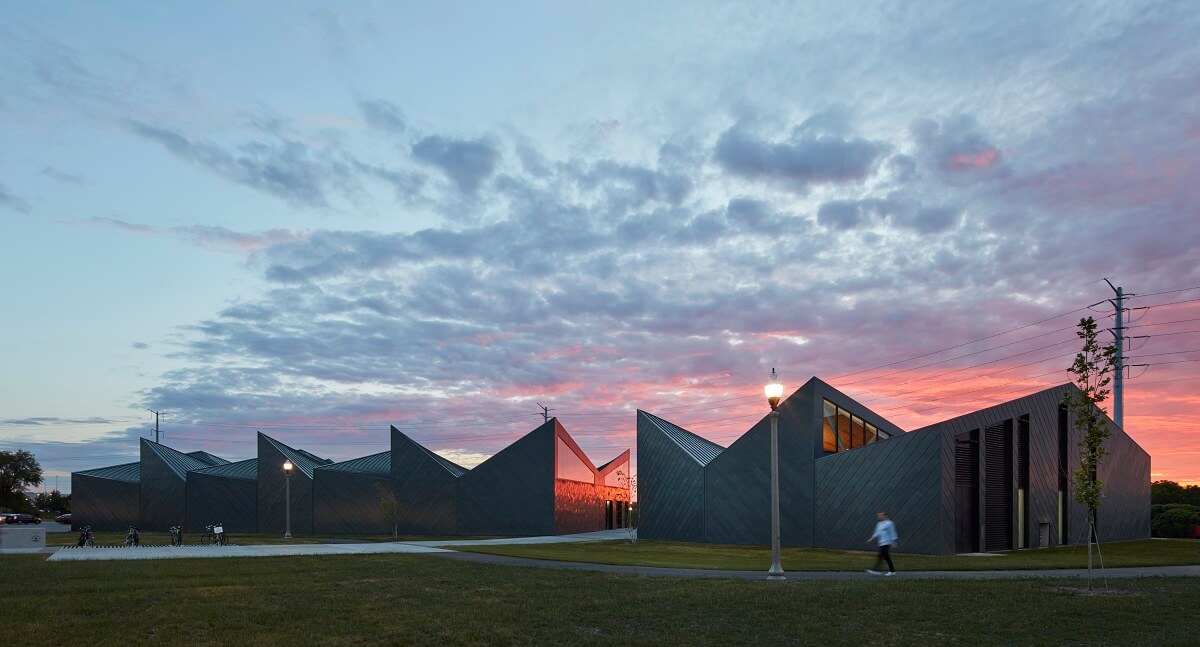 RHEINZINK panels for the new Eleanor Boathouse were fabricated by RHEINZINK systems partner Sheet Metal Supply Ltd. Designed by Studio Gang Architects, the 19,000 sq. ft. facility is the last of four new boathouses and river launches created by the Chicago Park District to reclaim the Chicago River as a major system of parks and water-based recreation.

Installation of the RHEINZINK panels on the Eleanor Boathouse was done by Bennett & Brosseau, Inc., Romeoville, IL. A competitive zinc flush panel was initially planned for the job but it was deemed too expensive, according to project manager Ryan Broom.  “We got involved with the general contractor, Walsh Construction, to value engineer the project and suggested RHEINZINK Flat Lock Tiles as a good alternative,” Broom said. “RHEINZINK reduced the cost and provided the great diagonal look that Studio Gang wanted. It’s a ‘full zinc’ job with both the façade and the roof and really turned out nice.”

SMS Vice President Ben Kweton credits Ryan Broom with providing the invitation to become involved in the project. “When Bennett & Brosseau approached us with the value engineering opportunity, we jumped at the chance to provide pricing and to remind the design team of the success of RHEINZINK on the earlier boathouse project,” Kweton said.

The design team also opted for a slightly hybrid version of traditional flat lock panels. “The tiles we fabricated had a slight offset at the top to bring the panel overlaps more into plane and to create a slight reveal,” Kweton said.

Installer Ryan Broom extolled the virtues of zinc. “It provides a great quality look and allows more architectural detailing than can be done with many other metals,” Broom said.